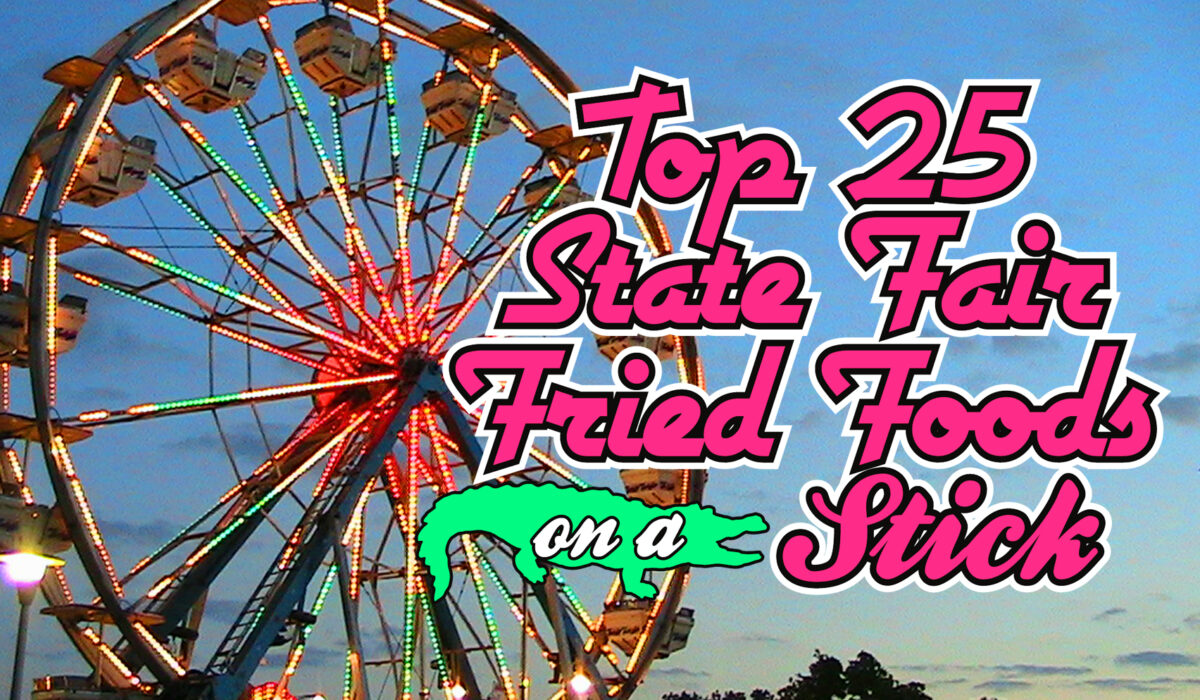 Is there anything as magical as walking down the midway of a state fair in late summer, the Ferris wheel twinkling like a comet overhead and the bark of carnies luring you to games of milk can and high striker? State fairs are a national institution in America, and a cultural tradition that can be traced back to the 19th century. Rides, games, agriculture and live stock competitions, tractor pulls, blue-ribbon bake-offs –country and 4H club state fairs are grass-roots celebrations of regional America. They’re quirky and eclectic, yet as down-to-earth and homespun as mama’s apple pie.

And speaking of apple pie… the concessionaires at state fairs hawk every type of food imaginable, an eclectic mix of roadside barbecue, greasy diner delicacies, and deep-fried foods on a stick. If there’s one food that state fairs have mastered, it’s food on a stick. For the snack-obsessed, don’t miss these 25 innovations… all delicious, high-calorie, and impaled on a stick.

1. Walleye on a stick. Yes, it’s kind of like a fish stick. This Minnesota State Fair crowd-pleaser is drenched in batter, fried, and smothered in tartar sauce.

4. Deep fried Snickers on a stick. While this popular concoction is a staple at state affairs around the U.S., it’s locally sourced at the New Jersey State Fair. The Mars plant is only 20 miles away.

6. Double bacon corn dog (Iowa State Fair). No word on whether it comes with a side of Pepto-Bismol.

10. Deep fried spaghetti and meatball on a stick (Minnesota State Fair). Of course, kids still end up wearing half of it on their t-shirts.

12. Alligator on a stick (Mississippi State Fair). It outsells chicken on a stick 10-1.

15. Macaroni and cheese on a stick (Minnesota State Fair).

17.  Mocha, chai, and espresso on a stick (Minnesota State Fair).

After all that food on a stick, you might want wait a while before riding the Tilt-A-Whirl.